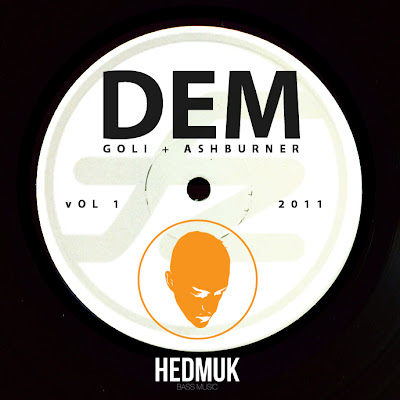 Having put their formative imprint, For The Win, on hiatus for the past few months, Goli & Ashburner return with their latest project in the form of DEM Recordings. Backed by both Manchester-based agency Faze 2 and us here at Hedmuk, DEM is aimed at bridging the seemingly small, yet apparently huge, gap between grime and dubstep. Since taking on their own individual growth-spurts from the UK garage scene, the two have often been set in opposition with each other despite many of their obvious structural similarities. There have been attempts to draw the two together in the past, but with a somewhat inconsistent rate of success which has arguably and, at least in part, been down to the lack of a label aiming simply to bind the two together for a positive result: the hugely competitive market created by digital releases has meant that many labels are left trying to establish themselves as consistent houses for dubstep or grime, alongside a minority who are still willing to push the envelope to varying degrees of success.

Thus DEM taps into an area that has perhaps been wrongly disregarded by labels in the past, not wanting to appear inconsistent in their brand development. With the simple goal, in their own words, of looking 'to bring a bit of bassweight to grime and experiment with how the two genres can work together', the duos approach is suitable to the task at hand; not wanting to try and define or mark something out before it has been created, the label presents an intriguing prospect and one which the many fans of both dubstep and grime have no doubt been waiting for. Dedication to the cross-pollination of the genres is the key here, and is something that DEM seeks to provide from the off.

To celebrate the launch of DEM, we are collaborating with Faze 2 and Goli & Ashburner to release the first in a series of free Zip files and mixes exclusively through Hedmuk. Featured in the Zip is a free EP featuring tunes from the duo alongside the likes of Merky ACE and MIK aswell as an exclusive thirty-minute showcase mix among other things.


Linking up for the label's first release with one of the most exciting talents in the grime scene at the moment, Goli & Ashburner and Elementz' remixes of MIK of Family Tree's grime anthem 'Do It' is to join the first free Zip file as a serious statement of intent. Keep an eye out for the official release date, announced soon.