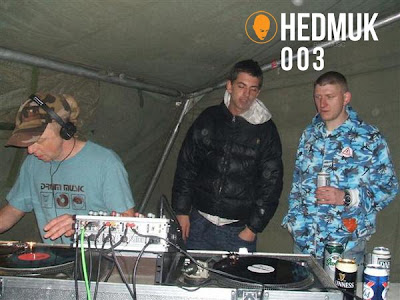 From having given the likes of Skream, Loefah, N-Type, Pinch and Kromestar their debut Manchester bookings to hosting the first Deep Medi showcase night, Ken-Evil's contribution to the scene has been huge. HEDMUK caught up with the man for an exclusive interview and mix featuring the tunes he's playing out at the moment:
Hedmuk: Would you say you were from a particularly musical background, or was it something you found yourself drawn to naturally?

Ken Evil: I'm not really from a musical family as such, although some of my earliest memories are of playing my Dad's records in the early hours of the morning when everybody was still asleep. There was always music in the house growing up and I have been an avid record collector from the age of 7.

H: What were your early influences in deciding to DJ and then produce?

K: My earliest exposure to mixing came from listening to early Electro and Hip Hop mixes from the likes of Afrika Bambaataa and Grand Master Flash from labels such as Tommy Boy and Def Jam. I didn't give it a go myself until relatively late on when I started playing Drum & Bass, being into the darker side from the likes of Dillinja, Lemon D, Spor, Evol Intent to name but a few.

H: Given your background in Drum & Bass, how did you come to find Dubstep so early in the scene's inception, and what motivated you to become part of it?

K: I guess you could say I followed the evolution of Dubstep from it's roots in UK Garage and later Grime when it was known as either Sub-Low, 8 Bar (as it changed every 8 bars) or simply 'Instrumental Grime'. One of the things that excited me most about it was that practically all the early producers were from my home town of Croydon - Plasticman (later Plastician), Skream, Loefah, Benga, Digital Mystikz, Hatcha, Artwork, everyone basically; and believe me, there's not much else that I can say I'm proud about coming out of Croydon for.

H: What was the motivation behind setting up Bass Camp?

K: Basically I'd found this new music and I wanted an outlet to play it. I'd previously been involved in running nights in Manchester and Madrid but was getting tired of D&B and this new sound excited me in same way that D&B did back in it's inception from Jungle and Hardcore Rave before that. It was something new and heavy and had lost the at-times cheesy elements of Garage and the self-aggrandizing ramblings of Grime. I remember tunes from Mark One (MRK1), Plasticman, Slaughter Mob, Kode 9, Pinch and Skream's first white label on Big Apple featuring in that first Bass Camp set.

H: Outside of FWD, which had been running since 2001, what was the Dubstep scene's infrastructure like in those early days and before the likes of Bass Camp here in Manchester and Exodus in Leeds, how limited was the North’s Dubstep scene?

K: Back in 2004 Manchester had producers such as Mark One, Omen and Zed Bias and the now defunct record shop Pelican Neck. Conor who worked there was the first to bring the likes of Vex'd up to Manchester and he always made sure the latest white labels fresh off the press were under the counter for my 2-3 weekly visits to the shop. Pelican Neck was run and owned by the Boomkat crew which was one of the first on-line or otherwise outlets for the emerging scene anywhere in the world. It was in the shop where myself and the likes of Se7en (now Indigo), K1, Mark One, Conor (U-Basstard), D'Script and Biome would meet up and discuss music and swap dubs; that was where it all began for me.

H: Bass Camp has been very influential, it was the first time many producers in the area were exposed to Dubstep. What does this influence mean to you, and how have you been able to witness it first hand?

K: It always gives me a great feeling of satisfaction when someone comes up to me and tells me that it was coming to Bass Camp or seeing me play that got them into Dubstep; I was recently told that Synkro found his inspiration from coming to one of Bass Camp's early events. Things like that mean a lot to me and is what makes it all worth while.

H: What would you consider to be your personal highlights of running Bass Camp over the years?

K: When Skream came up to play we had people travel over from Liverpool, Leeds, Leicester and from as far away as Norfolk, Cambridge and London; by 11pm Jabez Clegg was rammed! Rusko recorded an exclusive 'Auld Lang Sine' version of 'Cockney Thug' for our New Years Eve '07 event: that was pretty special. Hosting the UK's first Deep Medi event was a real privilege, the vibe was amazing that night and Mala absolutely loved it. Cyrus, Heny G and Walsh at the Chapel was rocking until 7am and when MC Subz told the crowd to get down low the whole place was skanking down to its knees. N-Type b2b Walsh with Easy Rider on mic as secret special guests; Kidnappa's first Manchester show, the list goes on.

H: What’s been inspiring you musically recently, and what releases are you looking forward to this year?

K: UK Funky has been creeping into my sets more and more over the past year, I'm also feeling the new wave of cross-over Funky/Dubstep artists such as Joy Orbison, Shortstuff, L-Vis 1990, Brackles, Redlight, Untold, Cooly G etc. Anything on Night Slugs is worth copping and I eagerly await that labels future output. Truth from New Zealand, who've played Bass Camp twice now, have a Disfigured Dubz EP and long awaited Aquatic lab LP ready to drop and they're going to be massive. Kutz, part of the new wave out of Croydon, has some serious productions in the pipeline and Cyrus has an LP due any time soon.

H: We had noticed more UK Funky in your recent sets, what was it that encouraged you to make the move?

K: Put simply, it's good shit. Like early UK Garage it's image has been tainted slightly by the more commercial/cheesy elements, but look deep into the scene and there's some seriously heavy stuff in there.

H: So then, you’ve DJ'd at major British clubs and across Europe, produced your own tracks and run your own successful night since 2004: what do you see as your primary role in the scene: a DJ, Producer or Promoter?

K: My production has been pretty limited to this point, and Bass Camp has been my main vehicle for pushing the sound but DJing has taken me the furthest in my musical path; Creamfields, the Warehouse Project, Ape at the Apollo and Outlook in Croatia being the major highlights.

H: You’ve been part of the Dubstep scene since the beginning and it may be an over asked-question, but what are your views on the future of the genre?

K: Dubstep has begun to splinter into various sub-genres as was inevitable and a lot of new people have started getting involved and producing their own take on the scene. This has resulted in a dilution of the quality in many respects and there is a massive new wave of very popular 'Jump-Up', mask-wearing producers that make pretty generic, high pitched tunes which sound to me like the Drum & Bass that was around at the time when Dubstep was evolving. Dubstep to me at the time was the antidote to this kind of D&B but I've always known that this element of instantly gratifying, dare I say it, dumbed down Dubstep would come along. I don't like most of it but it's out there. The simplicity and subtlety of early Dubstep was what made it different and interesting and a lot of the 'Jump-Up' artists seem to have overlooked this, although I love the likes of Jakes and Coki and did used to like Caspa and Rusko.
On the other hand there are people still taking the sound to new and interesting places, Joy Orbison, L-Vis 1990, Untold, Scuba and Shortstuff in particular and these producers give me hope and are keeping the scene vibrant. Everything on Mala's Deep Medi, for example, is of the absolute highest quality but as the scene becomes more popular it's overall quality will unfortunately suffer.
Tracklist:
1. J A Capone / Estate (Mellow Vibes)
2. DJG / The Gate (Lo Dubs)
3. Filtercutter / 1UP (Ramadanman Refix)
4. Cluekid / Sector 9 (Sin City)
5. J:Kenzo / Counteraction (Argon)
6. Calibre / Tenopause (Deep Medi Musik)
7. Ruckspin & Visionz / Give (Transistor)
8. Ruckspin / Jibber (Ranking Records)
9. Ruckspin & Quantum Soul / Venus Project (Transistor)
10. J:Kenzo / Tropic Thunder (Argon)
11. Noob & Brodisnki / Peanuts (Bok Bok and Greena Remix) (Night Slugs white label)
12.Redlight / Stupid (Digital Soundboy)
13. Kalbata / Wallabee (Double Science)
14. Egyptrixx / Everybody Bleeding (Night Slugs white label)