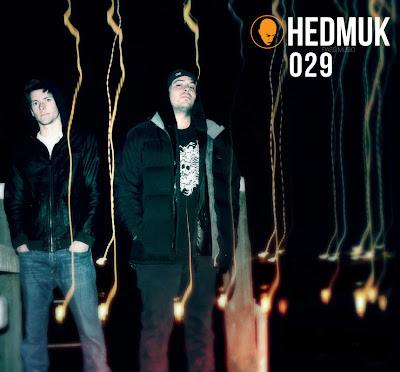 2011 has seen an explosion in interest for what, over the course of the year, has been termed and re-termed multiple times but ultimately is dubstep in its most elemental form. Perverse have risen through the ranks at an incredible speed this year and are on course to make the coming year their own: what is important about the duo, though, is a dedication (shared with a number of the year's other breakthrough producers, such as Killawatt, Thelem, District and Sleeper) to progression. With many people happy to level the lazy argument that the deeper end of the 140bpm spectrum has become 'boring' or 'repetitive' it is necessary for producers to continue to strive for originality and, to a certain extent, for the fans to demand it too. Originality is something that this New Zealand duo have, and to note it's correlation with their rapid ascent this year is key. We caught up with them for an interview and got them to lay down the latest instalment in our exclusive mix series.

Hedmuk: As an introduction, what are your names, where are you from and how would you describe your sound?

Brett & Alex: We are Brett & Alex [aka Perverse] and we're based in Auckland, New Zealand but originally from South Africa and Scotland respectively. We like to think of our sound as clean, deep, emotional, bass-driven and thought-provoking.

H: Had either of you previously been involved in making music in any form, or is Perverse your first real venture?

Alex: I had been messing around with producing for about 2 years before forming Perverse with Brett. I didn't really find my "sound" until about 4-5 months ago; I used to experiment in all kinds of beats like trip-hop, D&B and experimental stuff, but dubstep was always my favorite.

H: In only a matter of months you've successfully caught the ears of many of the most influential DJs and producers, including the likes of Youngsta and J:Kenzo: is there anything in particular that you would out this down to? Does this kind of support add an extra element of pressure when you come to making new beats?

B & A: The way we look at it, in most cases these guys are bombarded with tunes daily so it's not common that they just happen to stumble across up-and-comers. For us it was about chasing down those we felt might connect and feel the music we are producing, and only sending our best quality stuff: nothing we were unhappy with. We always sent what was, in our eyes, [music that was produced] to the best of our ability.

It does [add an extra element of pressure] in the respect that we have to maintain a standard, but that can only be a good thing.

H: How do you find producing as a duo? Do you always produce together, or have you other solo projects outside of Perverse?

Brett: We may not always start a tune together but we always finish it together. We spend most nights in the studio so just bounce ideas off each other and let the tune write itself a lot of the time. I think both of us have singular projects on the go as well, but not with the same passion I have for Perverse.

Alex: I found it very hard to work with others before working with Brett. We both work really well together and our styles seem to merge when making a tune. I make tunes on the side too but they won't see the light of day for a long time, I'm experimenting with loads of styles at the moment.

H: How much of a scene/following for dubstep is there in New Zealand? How did you first come into contact with dubstep, in particular the deeper sound that you're building yourselves?

B & A: Bass driven music has always had a huge following here, especially in drum and bass. The scene is extremely healthy catering to those of all tastes, it's continually growing and 9 times out of 10 in a positive way. Both of us were introduced to dubstep through friends and the internet, it became quite the addiction very quickly. The first artists we came into contact with were people like Mala, Vex'd, Distance, Burial, Pinch, Cyrus, Cluekid, Benga and Skream. I guess it was that first taste of the darker, minimal heavier vibe that we fell in love with and that is why we choose to reflect that in what we produce. You can possibly hear their influences in our stuff but hopefully it has an individual sound as well.

H: You've recently joined Rood FM, with your Monday night show: how did this come about? What sort of vibe do you aim to create with the show?

B & A: We were approached by Fish, one of the owners of RoodFM, saying he'd heard some of our stuff and wanted to know if we'd like a slot. To have a radio show was definitely a goal of ours but we didn't think it would come so quickly. We play anything we are feeling and we like to have a laugh. Anyone that has tuned in knows we don't take anything too seriously and we like to have fun, while interacting with the people in the chatroom and people on Facebook and AIM.

H: Can you take us through how you went about putting together your mix for us?

B & A: We just chucked a bunch of tunes we were feeling together and had a jam, as well as including a few of ours for good measure. To be honest, planning mixes for us never seems to really flow it's better just to have a jam and let the mix dictate itself.

H: Finally, are there any forthcomings or anything else in the pipeline that you'd like to put the word out about?

B & A: Definitely. We're stoked with the reception the Innamind release has received and are truly honoured to be a part of a release with some good friends and people we look up to. 'Skylark' is currently sitting at #5 in the sales chart (shameless self-promotion).

We also have a forthcoming vinyl release featuring 3 of our favourite tracks, coming early next year as well as a few other releases and projects in the works which will hopefully see the light of day very soon. There's collabs too, with some of our favourite artists and people we really look up to.

Big shout out as well to all the people helping us, pushing us, buying the releases and chatting to us. Churrrrrrrr...