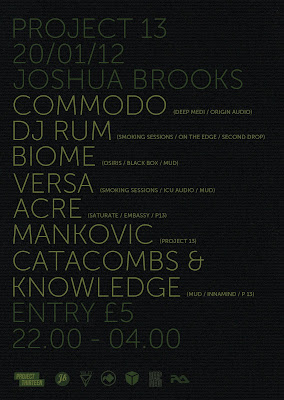 Since beginning as a livestream show back in May of last year, Project 13 has grown into a clubnight and podcast series whilst still maintaining their Wednesday night streaming sessions with appearances from some of the most exciting names in bass music at the moment, such as Biome, Versa, Indigo, Thelem and Shadowfax (and our own selves here at Hedmuk, of course).

In the run-up to their second solo outing as a clubnight, which features a stellar lineup of some of the hottest tips for 2012, we've linked up with the guys over at P13 to give away a pair of tickets to see Commodo, DJ Rum, Biome and Versa smash the basement of last year's Manchester Evening News 'Club Of The Year', Joshua Brooks, alongside some of the best resident DJs in the city. For more information about the night, including how to buy tickets, head over here.

To enter the competition simply send your answer to the following question to hedmuk@gmail.com with the subject 'Project 13 Competition':


Which four labels has Commodo released on to date?


The competition will end at midnight GMT on the 18th of January and the winner (selected at random by an independent third party) will be announced via the Hedmuk - Bass Music Facebook Page and notified by email.