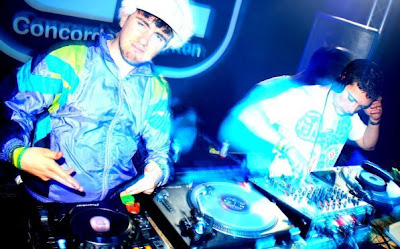 Through their back-to-back sets all over the country, diverse productions and tireless work in pushing new artists with their label For The Win Records, Goli & Ashburner have steadily and quietly established themselves as the dubstep dons of the Midlands. We caught up with Goli to chat about his influences, views on the potential for crossover between dubstep and grime and what we can expect in the future from the duo and their label. Goli has also laid down an exclusive mix, with the usual spread of deep, weighty bits and straight-up bangers. 2011 is looking to be an exciting year for Goli & Ashburner and FTW.
Hedmuk: To introduce yourself to those who don't know: what's your name, where are you from and how would you describe the sound of the tunes you make?

Goli: Hi I am Oliver Gibbons (Goli) from Nottingham, but at University in Leeds. I would describe our sound as a tough mixture of grime and bass weight aimed predominantly at the dance floor.


H: When did you start making beats, and have you always produced as a duo or is this something that was adopted further down the line?

G: I started building beats about 9 months ago because Mike (Ashburner) and I had been DJing as a pair since last August, so it made sense to produce collaboratively.


H: What were your earliest influences that might have pushed you in the direction of making music? And do these things remain influential to you now?
G: I was first influenced to make music when I first got into drum & bass, this was around 2003. I was listening to people like Amit, DJ Ink and Kryptic Minds, all the darker side of drum and bass, from there I got into DJing and played around on ejay loads, but instead of learning music production and pursuing the DJing I started playing in a death metal band until I was 18, which lead me onto dubstep. All the old drum & bass, hardcore and death metal I used to listen to is a big influence on what I do now: the drops in dubstep are so similar to breakdowns in hardcore music and the intensity in the raves are similar too.
You're Not There by Goli & Ashburner

H: What, would you say, are the most prominent advantages or disadvantages to producing as a duo?
G: To be honest from my experience if you find someone you work well with, then there aren’t any disadvantages, because you are both on the same level with every tune so it is second nature to know whether the other one is going to enjoy the ideas you bring to the table. The only disadvantage we have is that I am in Leeds and Mike is in London so we don’t have a full time studio space, other than that its bless.

H: One thing that has always stood out to us here is your willingness to use grime vocals in your tunes, Ashburner's 'Next Hype Refix' being the most obvious example and your more recent use of up-and-comer Merky ACE's vocal: how do you select the vocal to use and how do you approach using these vocals to add an extra layer to your beats?
G: To be honest Mike is the one who deals with all the vocal work. He definitely has an uncanny knack at being able to make vocals sit well on tunes. We like to see the vocal work ‘we’ do as our niche in some ways; not many dubstep producers bridge the gap between grime and dubstep, and we are very heavily influenced by grime so it made sense to use grime vocals in our tunes. The selection process isn’t really something we think about, we get sent a lot of vocals so we just use what we are feeling and either fit the vocals over an existing tune or create a new one. Merky ACE definitely caught our attention; he is a very talented MC coming up the ranks so we have been doing a couple of tracks with him which we are really happy with.

H: Further to that, what's your view on the potential crossover between grime and dubstep?
G: I personally think the crossover potential is huge, just look at Breakage's tune with Newham Generals 'Hard', it is a brilliant reworking of the original Breakage tune 'Together,’ and the vocals have made it an absolute anthem. To be honest I don’t think there is enough collaboration between the dubstep and grime world, a lot of the old grime producers are making UK funky instead of dubstep now, and the MCs are doing more and more tech house aiming for the charts or just working with the biggest artists in the scene. Thus making dubstep and grime collaborations few and far between.

BOXED (Remix) ft. Merky Ace by Goli & Ashburner
H: You've been previewing a lot of new material lately and you don't appear to have been nailing yourselves to any one sound in particular: what can we expect from you production-wise in the near future?
G: As we are relatively new to the production world we have been playing around with where we want to take our sound and are really happy with what we have achieved so far. Through these experiments we have been making a lot deeper stuff, these tunes are going to be coming out under our new alias, so watch out for them. As for Goli & Ashburner it will be business as usual.

H: You also run one of the UK's best and most consistent new labels in the form of For The Win: what was it that made you want to start your own label?
G: Cheers for the props. We started the label because in Nottingham there were very few outlets for electronic music and we were hearing some really great stuff coming out of the city, so we decided to make a label and start releasing it.

H: How do you go about choosing which beats you want to release on the imprint, as the roster as it stands is a particularly diverse one?

G: We both take a very active role in searching for new music and if we hear something we instantly like we sign it. As we started without any prior knowledge of how to run a label we have made a few mistakes along the way, but now we are very proud of our roster and the beats we are promoting and releasing. 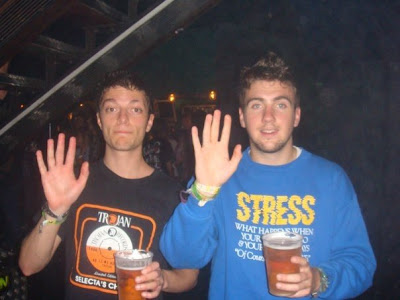 H: Do you find that your location in a city not necessarily strongly associated with dubstep has been a help or a hindrance to your work as both producer/DJs and label managers?
G: When we first started out, being situated in Nottingham was not perfect. Three years ago a lot of nights were bickering and it was very hard to get DJ bookings in the city if you didn’t know someone involved with the night. I mean we played our first five or six gigs outside of Nottingham before we actually got booked in Nottingham (laughs). Thanks to what we have achieved it has allowed us to represent Nottingham all over Europe and even the USA which we are really proud of. Label-wise it was good because we were one of the only dubstep labels not just in Nottingham, but in the whole of the Midlands so this allowed us a pretty free reign with signing beats off the local artists. Also now we have a night in the city and have become pretty established as part of the furniture in the Nottingham dubstep scene, it has made it a lot easier for us to comfortably grow the label and collaborate with different brands coming out of the city.

H: Do you consider most strongly as producers, DJs or label managers?

H: How do you balance these three commitments with each other: do certain aspects of your involvement in music occasionally have to take a back seat whilst you focus on another area, for instance?
G: It is a very difficult balancing act at times especially as I am in the third year of my degree, work part time and have a girlfriend, so from time to time things do get neglected; but I would say on the whole we both keep on top of things pretty well. To be honest I love what I do so I could never complain.

H: Finally, is there any news or projects in the pipeline that you want to put a word out about?
G: Got a few things: release-wise we have the ‘One’ EP 12” coming out on Loft Party Recordings very soon, also Kraken digital release of 'Gutter Riddem' / 'Badness'. FTW011, Magenta's Sphynx EP, is coming out early next year and will be available on Beatport, DJ Tunes, Junodownload etcetera. Then we have our own six track Goli & Ashburner EP coming out in a few months on For The Win, which is our first collaborative release on our own imprint. Then finally, we have started a new label which should be releasing some tunes off our alias soon. Also we are releasing a Free For The Win LP to say thank you for the support this year and that should be out in a week or so. And big up William, Subreachers, Benton, Killa & Instinct, Antics and all the For The Win crew.