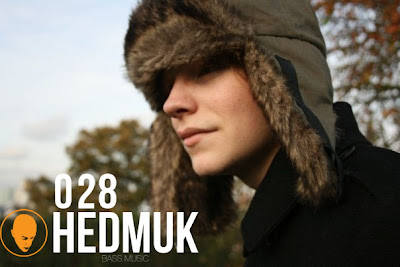 One of the hardest working producers around, Legend4ry is known not only as a talented beatsmith but also as a tireless promoter of all that's positive in music. Striking a balance between a fierce sense of independence and a dedication to pushing good music to new ears his is an interesting take on what might loosely be called 'the music industry', and this is continuously reflected in his own tunes as he refuses to be boxed in by genre specifications and other industry terminology. The result is music filled with a striking sense of originality and a feel that is instantly recognisable as 'Legend4ry'. We caught up with him to talk about his approach to making beats, among other things, and got him to contribute the latest mix to our series.

Hedmuk: To introduce yourself, what's your name, where are you from and how would you describe your sound?

Legend4ry: I'm Chris Gallienne and I make music under the moniker of Legend4ry (as well as Lienne and JustAnotherAlias). I'm from Woolwich which is in the borough of Greenwich in South East London.

I would describe my sound as bass music with an emphasis on pads and percussion.

H: When did you start making beats? Had you made music in any other forms beforehand?

L: I started making music at around 14 or 15. I distintively remember having a copy of Ejay from a PC magazines demo CD which only had about 20 loops in it when I was around 10/11 which I used to drive everyone in my family bonkers with hearing the same stuff just moved around a little bit each time. Someone uninstalled it from the PC and took a key to the disc to deem it unuseable (harsh, I know! Still don't know who did it (laughs)). Other than that I had toyed with things like Music/Music2000 on the Playstation but didn't really 'get it' . I have always liked the idea of making music but never really pursued it until I was around people who felt the same way.

H: You've got huge variation in your productions, ranging from straight-up dubstep, to hip-hop to beats hanging around the 130bpm bracket: Is this something intentional, aimed perhaps at keeping your production fresh, or does it just happen for you? How do you balance all of it?

L: I start making music by finding a break, a sample or even a sound and find something which 'hits' me in a certain way (which is hard to explain) and sometimes I'll think "I need to go a bit hip hop with this" or "this would go well in a house tune" and then work from there.

95% of the time I will have the intention of making a dubstep track and if it starts to shape into something else then I will let it. I don't think its healthy to force a tune into being something it isn't. Even if I have never made that genre before I will always stick with an idea if it's solid. I am not afraid to make other genres, I think a lot of people give off that impression with their music, each tune just sounds like a re-hash of their last tune with a few set of drums: that doesn't interest me at all! I want to take music as far as I can as a person not genres.

This is what 'JustAnotherAlias' is all about, when I make music which isn't totally a "Legend4ry" track I put it into the JustAnotherAlias name so as not to stear one name in too many directions. I don't really push this alias as much as I should, with only one commerical release under that name and a recent self-released free EP called 'An Introduction'; a mix of house, dubstep, hiphop and triphop. On the whole, JustAnotherAlias is more of a personal project for now.

H: You also host your own radio show, Wednesd4ry: what was the original thinking behind the project? Have you any plans to expand it?

L: Wednesd4ry is primarily a vinyl-only radio show (with the addition of a CDJ if a guest brings it themself) broadcasted with video which is thrown every Wedneday with my best mates T4X and Chris Melo.
It started from me and T4X wanting to get on radio and we played on pirate station WaxFM after doing a one-off internet show and really enjoying it. We stopped broadcasting on Wax as it was cheaper to buy our own webhosting and stream it ourselfs pushing dubstep and we also do the odd hip hop set.

We recently revamped our website and hit our 50th show a few months ago which was a really big thing for us! We had a huge party with ballons to celebrate and got some of our past guest as well as other DJs to come down and play (the line up was Myself, T4X, Melo, Triggy, One-R and Focus).

Carrying on from that we now have a pretty solid regular fan base and will continue to be independent from any other radio show, having a one-off broadcast every Wednesday. We don't have to compete with DJs who played before us nor have any constrainsts on how long we can play or be told how to act when on air. I think this helps us do the best show we can, play what we feel like and just have a radio show which is a fun and interesting listen. I think a lot of radio shows these days are all about dubplates and are very formal, and that's not our cup of tea.

H: Some may also know you as one of the moderators of the Production forum on dubstepforum.com, how did you get involved with the guys who run the site and what were your motivations behind taking up the post?

L: I have always frequented dubstepforum, it has been one of my main sources of browsing on the internet for around 5 years now. When I got more into making music and wanting to better my music I pretty much 'lived' in the production area.

At around '09ish the production forum wasn't really moderated by any of the current mods and it was a death trap for anyone wanting to ask questions which have been asked before due to unhelpful members and no moderation. As a forum we nominated Shamanji to moderate the board, after a few months he went on tour with his partner (who together make up Sub Swara) and asked Dubway to add me as a mod temporarily while he was on tour. Long story short, Mr Shamanji is a busy man and had to step down as a mod so I became the dedicated moderator for the production forum. Now its run by myself, Pete Bubonic (aka forsaken/runs the Soul Motive label) and Wub, who is famously the funniest person on the forum (and probably the whole of the internet in my opinion).

Together we try and make it a place where you can get the help you deserve and we constantly add to the huge database of knowledge we call the 'Production Bible' which is a great resource for anyone wanting to get into making music.. It covers everything from making sounds to layering drums, mixing down and where to find the best and cheapest mastering all the way through to being an artist in this day and age. I think this is my motivation for moderating the board, I like the fact that I can hand pick discussions and add them to the Production Bible which helps people stick at making music; that is something I struggled with for a few years before I found my feet. Obviously I like the fact there's less spam and derailing of topics as it makes it a pleasant place to browse and to be part of it makes me happy in some way!

H: Tell us a bit about how you went about putting together your mix for us.

L: Honestly, I thought about a mix to show to off my DJing skills but then I thought that's a bit of boring: people can listen to my weekly show, or come see me out to hear how my DJing is. For this mix I picked tracks I am really feeling at the moment to create a interesting listening experience as opposed to something that needs all your attention. It goes from a mellow start to house pitched up to 140 and then to loads of my own tunes with the odd track by someone else. I took a really mellow approach with this mix, so pop it on when you're sitting on the train or having a nice lazy day; that's where it sounds best!

H: Finally, are there any forthcomings or anything in the pipeline that you'd like to put the word out on?
L: I'm playing the Audio Doughnuts first birthday on the 25th of this month. Don't forget to lock into my weekly radio show every Wednesday 8-10ish (pm) GMT at www.Wednesd4ry.com. My 'New Directions' EP recently got re-signed to Dubstrict Records after a bit of a ca-fuffle over which label is going to sign it, so that's good!
Shout outs to: Crises, Majora (aka Bandicoot), T4X & Melo, Sashwat (of Dank N Dirty Dubz), Dubstrict Records family and anyone else who pushes and enjoys my music!
Not forgetting thanks to Hedmuk for asking me to do one of these: I've been wanting to for ages!