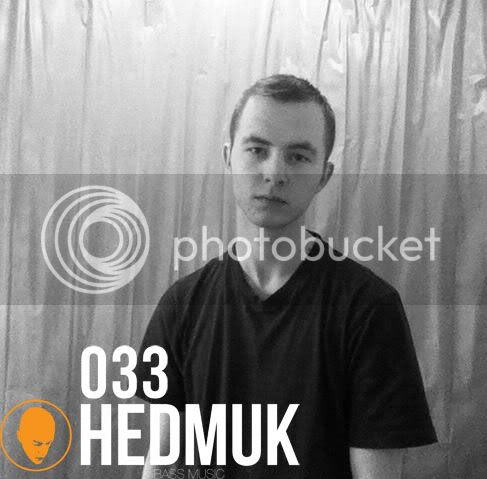 Collision has, for the last three years, been steadily sculpting his own sound from the 140bpm spectrum and now, with a couple of releases under his belt already, is establishing himself as one of the most consistent producers of original and intricate, deep dubstep. His tunes are characterised by their variation: each built around drum patterns constructed to test the confines of their tempo range, with an almost rhythmic, if not obsessively groove-based, approach to basslines and a sparing application of mid-ranges. Last month we showcased this with a free EP from the young producer, and since then have caught up with Collision to ask him about his approach to making music and to have him lay down a mix for our exclusive series.

Hedmuk: As an introduction, what's your name, where are you from and how would you describe your sound?

Collision: I'm Jay, I'm based out of Birmingham and I would put my music on the darker, deeper end of the 140 spectrum.

H: How long have you been making beats for, and what was it that first made you want to start producing music?

C: I started producing in January 2009, when I was 16. I always wanted to make music but never really knew where to start; I stumbled across the trial version of FL Studio one day and at first it looked very daunting. After a few months of nothing but turning knobs and pressing buttons I started to make something that sounded remotely like music. After that it was just a matter of practice makes perfect or, in my case, practice makes decent.

H: Which producers do you consider as having an influence on the music you make? Or do you tend to take more inspiration from things or people outside of music?

C: I listen to a lot of music outside of dubstep and electronic music: musicians from Moby to Portishead, Radiohead to Jai Paul, Warpaint to Little Dragon. I think it's important to take in some influence from music outside of the stuff you make, otherwise the influences become too obvious. For dubstep there really are too many producers I admire to mention here, but when you listen to a lot of it then it almost becomes impossible to not take in those influnces, regardless of what kind of music it is. For example, lately Ive been listening to a lot of techno and house, and I feel that that's had a positive impact on my music.

H: The variation in your tunes seems to stem from the attention paid to drum sounds and patterns: is this something you do consciously? Do you tend to sit down with intentions to make a certain style, or do you just let it come naturally?

C: It's definitely something that comes naturally. I think if you sit down and try to write a certain type of tune then you're going to have problems. I usually just playing around until I find a decent pattern to work on and then let that carry the tune. It usually starts with the drums as I find it's easier to fit the drums to a bassline rather than the other way around.

I find when I'm producing it's important to keep raising your own standards, this way you are always going to be getting naturally better over time and not fall into a period of just making bad tunes and not even realising it.

H: Birmingham is a city perhaps better known for its contributions to the grime and bassline scenes: what sort of a community - in terms of labels, clubnights, other producers etcetera - is there for dubstep?

C: There's always been a space for dubstep in Birmingham. The scene here has improved massively in the last year or so, with events like Substep and Movement promoting quality 140 music, and labels like Area Recordings and Night Tracks putting out great music. And with DJs and producers such as Be-1ne, Krytikal, Burlish, Lysergene and myself the scene is starting to look very healthy in Birmingham, at least compared to how grim it once looked.

H: Take us through how you went about putting together the exclusive mix you've recorded for us.

C: The tracklist is made up of a mixture of tunes I've been sent by producers I'm feeling and by myself, some newly released bits that I wanted to throw in as well as a couple things to keep it fresh.

H: Finally, are there any forthcomings or anything else you'd like to put the word out on?

C: I've got a tune I made with Gantz called 'Chant' that will be coming out on a 4 track EP on Tribe12, also featuring Perverse, Catacombs and Congi. I've also got a solo release on the ever-prolific Innamind Recordings imprint which will be out later in the year. If anyone wants to book me they can get at me at collisiondub@gmail.com. Also big up to every DJ who's ever played one of my tunes: it means a lot.