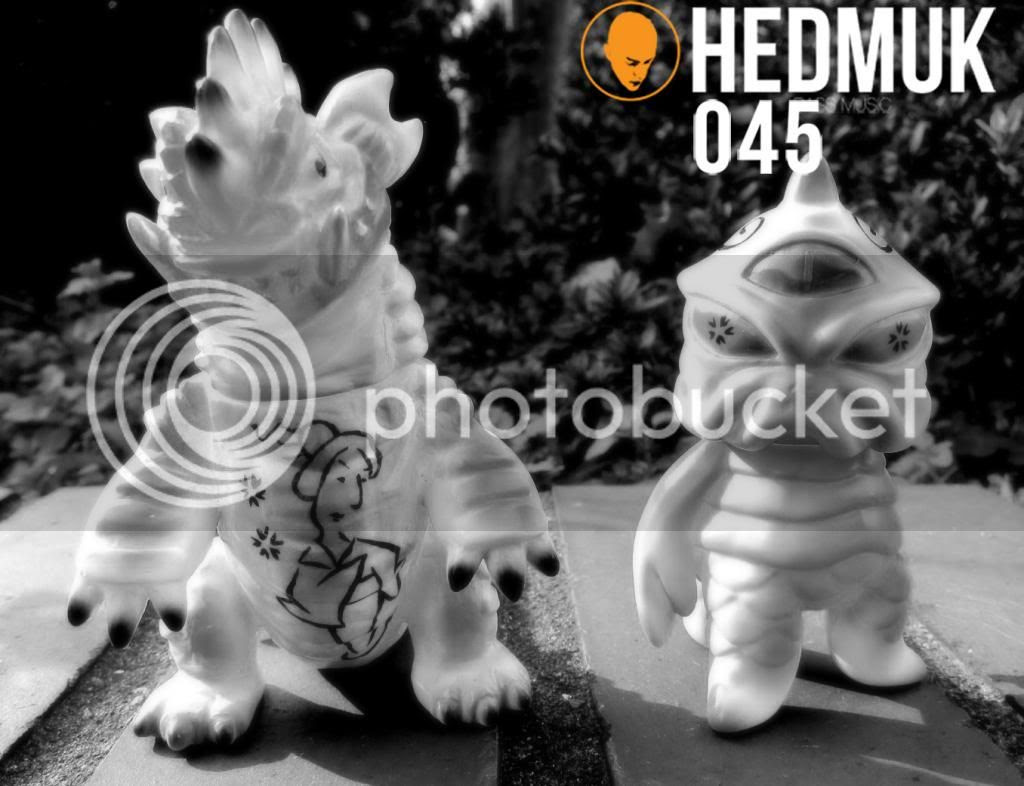 Since being featured by our friends over at PYC Sessions, Kaiju have been on a roll; buoyed along by a rapt fanbase as well as the big-hitting likes of Kryptic Minds and Youngsta, the first thing that most won't notice is the almost imperceptibly high benchmark they set for themselves. With a simple formula of 'less is more' - excepting, of course, when it comes to the sub-bass - the duo's productions serve to further the myth that simple music is simple music; with so few components to each tune, each one that is present has to absolutely earn its place. And earn their place, in a Kaiju beat at least, they do: the result is chasms of space for that characteristic, tape-warm sub-bass to groove in and through. With a very exciting 2013 ahead of them, January seemed the ideal time to link up with the pair, and have them contribute a stunner of a mix to our exclusive series...

Hedmuk: To introduce yourselves to those who might not know, what are your names, where do you both come from and how would you describe your sound?

Jamie: ...and he's Paul: together we're Kaiju. I'm from Sticksville somewhere near Bath/Bristol and Paul's in Cardiff. We make bassy stuff around 140bpm that tends to be on the deeper, dirtier end of the scale. Sometimes it's got garage-y undertones, sometimes theres reggae vibes, but all the time there's lots and lots of bass.

P: None of this Skrillex shit.

H: When did you both start producing? Had you been working on solo projects before Kaiju, and do you still have other projects on the go at the moment?

J: I'd been making D&B for about 5 years or so, had been through the ups and downs of the industry and started running a label. Paul, after much thought, decided that he wanted to send beats to us and it kinda blossomed from there really. I'm still involved in the running of the label but at the moment i'm really enjoying the 140 area so for now I'm concentrating on that musically.

P: I've been producing about 3 years or so now, still as involved with the D&B scene as much as possible, but also finding myself drawn to the 140 space more and more at the moment.

H: You were picked up relatively quickly by Kryptic Minds to release on their Osiris imprint: how did this come about, and was it more than a coincidence that you signed to a label run by producers with a similar musical background to yourselves in drum & bass?

J: When I was working as designer for Chemical Records, Si and Leon came in to talk about the look of their album and I gave them a CD of our tunes I'd been checking on the car stereo during the tedious drive in [to work]. I didn't really expect to hear back, but they were really into 'Close Break' and 'Belcanto' and we then started to talk about being exclusive.

H: How did it feel to get such an opportunity? Were you consciously choosing these specific labels and artists to send your music to?

P: Amazing, to be honest. With J working at Chemical and us both having a bit of experience in the art of dub-sending we definitely had an idea of who to send to, and still to this day only really give new new tunes to Yunx.


H: DJ Thinking did mention, in our recent interview with him, an in-house designer at Chemical that he'd worked with on the Black Box, Black Acre and Box Clever stuff, but we hadn't put two-and-two together to realise it was you. How did you get involved with doing the design stuff at Chemical? Do you think that your music as Kaiju is at all informed by that aesthetic side to your creativity? Perhaps even just on the simple level of learning graphic design programme interfaces as helping to learn production DAWs, or vice versa?

J: I've wanted to be a designer since I was about 6, I think; it all stemmed from going car racing with my parents and seeing the liveries and stuff. I started copying what I saw (mostly cigarette logo's (laughs)) and then progressed onto making new liveries and logos. I find my creative process with design crazily similar to that of when I make music, and in both areas I feel my style is always 'less is more': I've never believed in over-egging something. Although I attended College and Uni for design, all of my computer knowledge is self-taught so opening Windows and fiddling with things is second nature to me, and definitely helped me when it came to getting down and dirty with Logic in the beginning.


H: You seem to enjoy working with vocalists: is there somewhere from which this particular influence comes from? Or is it more a case of viewing the vocal as just another instrument or 'part' within the tune?

J: I'm a sucker for a vocal. Being brought up on 80's power ballads and soul singers probably has something to do with it, but personally I think a vocal can really help make a tune human, especially nowadays with all this cold computer music about.

P: Some tunes feel as if they need a vocal and some tunes just don't. I've always been heavily into dub, reggae etc. so appreciate how a vocal can bring a tune to life.

J&P: Basically it's about 60 minutes of us. Being relatively new to the scene this is the best way to show people what goes on in our brains, so there's a couple oldies in there but most of it's new and pretty exclusive really. We've got collabs with Truth, Killawatt, Perverse and Nanobyte and a couple remixes, all with lots of nice warm sub. And we're working more and more with MC Toast  at the moment, so thought it'd be rude to leave him out!

H: How did the link up with Toast come about?

J&P: We're pretty lucky in that we hit him up and got on like a house on fire. We've had some vocals off him for a couple tunes, and are available as a package to book for gigs so it was only right to have him on the mix. He's genuinely one of the nicest people you'll ever meet, so we feel quite honoured to work with him.

H: Finally, are there any forthcoming releases or anything else in the pipeline that you'd like to put the word out on?

J&P: We've recently spoken about our next two releases with Osiris, although we can't really say much. There might be a sneaky clip of a certain tune we've done with one of our heroes floating around, and that might be backed with something awesome but that would be telling….

Cheers Hedmuk, been an honour to be featured on your blog!