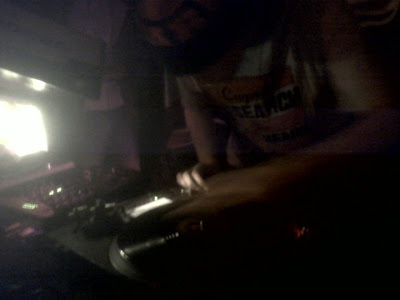 The focus on space and a stripped-down approach to beat building in the production of dubstep is something which has, in recent times, caused the relevant sections of many independent record stores to become saturated with the latest releases from anyone who has seen the now infamous 'UKF Dubstep Tutorial' video. However, rather than resulting in mass disillusionment this means that it is even more rewarding when you successfully unearth a new producer with genuine promise, drive and originality. And so we come to Dark0; HEDMUK caught up with him to find out more about his approach to the music he makes, what influences him and what he can see on the horizon.


D: Always used to fuck about with Fruity Loops from when I was about 17 but never really got the hang of it. I was on it solid one day last year and made a beat that was pretty solid (well, I thought it was at the time) and I sent it out to my mate Ross (aka. DJ Roskoe) here in Birmingham and got it played on radio. Producing kicked off properly for me at the beginning of this year.


D: I wouldn't say so, no. I used to fuck about with a guitar when I was younger but never got great at it like all my mates! Still though, I find I can be more creative using software. I'm currently trying to pull funds together and play more shows around Birmingham (where I'm located at the moment), so I can splash out on maybe getting Logic and a sweet keyboard. I like to think I'm a musical person naturally though (laughs). At first I tried to make something funky, I was proper into my funky at the time but since then I've developed my own sort of style and drifted into that darker side.

H: What or who was it that introduced you to dubstep, particularly the darker, deeper and more melodic style you appear to favour in your own productions?

D: I remember listening to Benga's Essential Mix at the beginning of '08, I ain't a veteran or whatever like people want to claim to be and shit. I remember hearing Benga's 'Assumptions' remix on that and thinking "yeah, this is live". It was my brother who put it on a little memory stick for me to take upto my army college (which I boarded at); I rinsed that mix like a 100 times. After that I started doing my research and got hold of Vaccine's mix from 2007: that was the vibe I wanted to do but with more of a physical edge. Beautiful stuff. Just needed a tiny bit more of a punch to make it border to what I wanted to do.

H: You seem to bear your influences strongly, which artists in particular have affected your approach to your music?

D: Like before Vaccine's mixes which had a lot of Scuba and Gravious tunes. Other than that, everytime I go and see Youngsta live I just absorb that vibe. He's different. That whole darkness thing is the one. I try to incorporate elements of ambience with that darkness. I'm working on some new deep stuff at the moment and am looking to get a digital EP released over the summer. Try and push the name further; get people to enjoy my music.

D: Yeah for real, I used to check FWD>> religiously. Not any more though: its all fucked up. That place was like magic to me and my bredrins, just used to go there and stare at the DJ and watch them mix in awe. Used to go out of that place in a trance with all sorts of ideas. FWD>> was the one.

H: Which producers are currently interesting you or even inspiring you?

D: Have to go through my record bag for this one! I'd have to say Headhunter or Ramadanman at the moment. They are pushing some different sounds that I'm loving. Every set I play I rinse 'Humber' by Ramadanman. It's that minimal, euphoric tip that just blesses me in more than one sense of the word (laughs).


H: It's a question asked too often, but what is your view on the future of dubstep?

D: It can go many ways at the moment, I think. For me some people are deading it completely. I ain't gonna name drop, but most of it coming out on vinyl release and getting signed seems to be just a bunch of noise with a 140bpm beat behind it. The Autonomic boys are pushing that 'drumstep' (as I like to call it), 170bpm sound. I like that, it's sexy, but it ain't my thing. I'd like to see it re-route itself to where it was just pure; those old subby vibes that Loefah and Mala push: that's just banging.

H: Have you got anything coming up yourself (live dates, releases etc.) in the near future that you'd like to do some healthy plugging for?

D: Yeah I play about in Birmingham sometimes weekly in Rainbow. Nice little place. Good crowd that appreciates diverse types of dubstep. As for releases, I'm still in the process of mastering and finishing my EP, which I'll push in the summer. Getting a couple dubplates pressed too to get the full effect of my production. We'll see whatever gets offered my way too, I'm keen to play out. I enjoy it so much seeing people vibing in front of you to songs you've made/chosen to play: sick feeling. I've got a Facebook page and a Soundcloud too. Just looking to polish off my first year at Birmingham so I can concentrate on the music more.