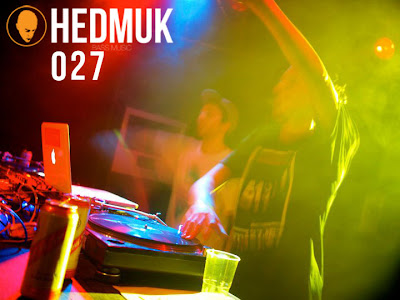 A duo who have quietly been building up a lot of support over the last half a year or so, My Nu Leng first came to our attention with the lurching 'Fireflies' as a standout track on Dr. Hugo's Exclusive Mix for us last May and since then have been impossible to pin down as they continually bring something fresh to the table with their beats. Switching with ease between a range of styles around the 130-140bpm mark, and with crisp production to boot, a strong garage influence underpins their sound without leading them down the (admittedly occasionally inviting) path of so many Burial-soundalikes. With a weekly show on Rood FM and close ties with Crises and MindStep Music, it seems that the My Nu Leng have built themselves a solid platform from which to take on 2012; we spoke to the pair about their approach to making tunes and got them to add the latest instalment to our mix series.

Hedmuk: As an introduction for those who may not know yet, what's your name, where are you from and how would you describe your sound?

James / Tommy: We are My Nu Leng and are a duo consisting of James Irving (Jammo) from Bristol and Tommy Jackson from London.

We like to write music covering a large spectrum of genres and styles, from garage to funky and from down-tempo to dubstep! Usually always fitting somewhere within the 130-140 BPM range. Our influences have worked well together and the more music we are making, the more we feel we are honing in on a particular sound.

H: How do you find producing as a duo, particularly considering the physical distance between yourselves?

J: We have managed to find a nice balance considering the distance at times but it can vary for each track. Before writing as a duo we both worked on our own individual music - to have another set of ears and eyes when it comes to production has really helped us strive to create music that (we hope!) is a little bit different, not sticking to certain barriers producers may be accustomed to in certain genres.

T: I personally prefer it, we only started making tunes together a short while before Jammo left the area for Uni, during which time we had sat down & made just a few tracks together. It works well in that one of us can work on something pretty much until hitting a block, then send the file to the other to have a crack at. It pretty much goes back & forth & changes the whole time until we're happy with what we've got.

Damp on Rinse FM [DJ Wonder] by My Nu Leng

H: Your beats take in a diverse range of sounds and styles including garage, uk funky, bassline and dubstep; is this something you have always set out to do or has it occurred more naturally?

J: It has definitely happened as a natural progression the more we produce together. The diversity of music we both listen to has always helped but the more new music we show each other, the more we seem to get blown away by the talent out there! And I think it is then about just striving to get even remotely near that level of production: one day!

T: Yeah definitely naturally, I know that when I've sat down with the idea of starting something of a certain style, it's always ended up completely different; for instance 'Fireflies' was originally a nice little garage-y number before Jammo put the b-line in it and it completely changed the tune! Between us we pretty much listen to anything, which I know is a bold statement & probably overused, but for example my missus' favourite kinds of music are people like Dean Martin, Edith Piaf, the blues etc. so that's always on in the gaff: it means there's always a different kind of idea there, it's just being able to get our ideas down, which we can't always do but that will come with time & learning, which we are still constantly doing.

H: There is a strong garage influence throughout your tunes; who are some of the artists that you draw inspiration from? Where, or from who, else do you take influence from when building beats?

J: We've both been pretty much obsessed with Burial & have been for years now. We put together our 'All Burial Mix' quite some time ago just for ourselves at the time, just so we would be able to listen to all of our favourite bits in one mix: we still love it just because it's a perfect collection of music!

J: I also feel we've definitely got a lot inspiration from the other guys in the scene at the moment. There's a really strong community at the moment where a lot of people are doing big things & all seem to be kind of coming up together, everyone is pushing their own sound & doing it really well which just pushes us harder to be more productive. Guys like Versa & Rowl and the whole ICU lot, Percept, Anex, Majora (Bandicoot) are smashing it.

T: Mixing-wise, I'd rate Solitude & Oneman who, although are both at completely opposite ends of the spectrum, are both at the top of their game in what they do & always leave me feeling a little bit mind-blown (laughs)!

H: You recently released your debut EP (the 'Fireflies EP') through MindStep Music; how did this come about?

T & J: The release came about after one of our good mates Syte introduced us to Crises. We had put out a couple of free downloads & been sending stuff out for a bit, and we'd had a couple of responses, but MindStep just seemed like the perfect label to put out our first release on.

T: It's pretty much a collection of some of our favourite music & artists at the moment, as well as a chance to put out a few of our unheard tracks.

I basically made a playlist in my Serato a while ago & have been adding my favourite pieces of music for a while, then it was just a matter of having a couple of practice mixes to get a rough order & record it! There are a fair few Leng tunes in there, a couple of which, like 'Fireflies VIP', that pretty much no one has heard yet & 'Saviours' which is the first actual track we made together (laughs)!

Anyone who has heard our radio show on Rood FM (Saturday's 4-6) knows that we cover most genres within the show & it's always pretty fast-paced. I thought it was important to cover the majority of styles which we actually play out or on the radio so that people who have only heard a few of our tracks know what we cover!

J: We have an EP forthcoming on Mindstep Music featuring 'Fireflies VIP' and 3 remixes of 'Fireflies' from Crises, Wonder and Tunnidge! We are just finalising our first vinyl release, which we are very excited about, and have remixes coming from J-One, Versa & Rowl and Demon as well as a few remix projects ourselves!

T: Deejaying-wise, we are residents at 51 27 at the Thekla in Bristol which is a new exciting night to be involved with, so big shout to the 51 27 lot and Thekla heads! Please check out our Facebook page for our full listings, we have quite a busy end to the year!

My Nu Leng - HEDMUK Exclusive Mix by Hedmuk on Mixcloud