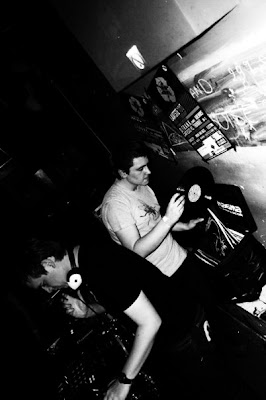 Our latest feature comes courtesy of Belgian production duo Subreachers. With a style that touches on a wide-range of sounds within bass music, their beats are hardly confined by any notion of genre specific sounds. Unafraid to build lush, atmospheric layers, uncompromising in their emphasis on heavy-sub and above all dedicated to making music with feeling, be it deep, dark or ambient, their production output is one of real depth, variety and originality. With a slew of releases lined up for the coming year, including a 12" on the forward-looking bass label Orientis records, we caught up with Subreachers to discuss future plans, their sound and the Belgian bass scene.
HEDMUK: To introduce yourself to those who don't know yet, what are your names, where are you from and how would you describe the music you make?

Matthias Subreachers: Hi my name’s Matthias, I’m from Londerzeel, near Antwerp, Belgium. The music we make is hard to describe because it’s so broad, it goes from autonomic style D&B to dark low end dubstep or even experimental ambient soundscapes. For us a name, tempo or genre doesn't really matter. We just make whatever comes up in our minds not really taking notice of any particular genre or sound.

T: Of course we have a lot of influences but we try not to focus too much on what other people are doing and try to do our own thing.

H: Did you produce individually before joining to form Subreachers? How did you get in to making beats together?

M: We where both total novices when we started Subreachers, so no.
T: We actually started fooling around in Ableton just out of boredom in between some home DJ sessions. Matthias and me knew each other from back in high school, after we changed schools we both went a different way and it wasn’t until a few years later we met up for some drinks. We started talking and found out we were loving the same music; after some home sessions we decided we were going to start doing Subreachers.

M: At that time we didn’t have a name or were playing any gigs. When we started making beats together one of them got airplay on national radio in the now cancelled show Baselab. We didn’t have a name for ourselves so it was due to that event we had to come up with something really quick.

T: Come to think of it before I got into dubstep, I was making weird disco/house edits. I own a lot of old records and I used to have hours of fun cutting those up and making edits with a tape deck.

M: Eventually when we got serious about making beats it picked up for us. Our first release on Medschool will be out next week and our debut 12" should hit shelfs sometime soon.

H: What are the advantages, in your opinion, to working as a production duo?

T: For us it’s the amount of work you can get done faster.

M: We make tracks together but we also produce tracks on our own, that way we can put out a large amount of tunes constantly. When one of us isn’t as productive for a while, the other one will kind off fill in that void.

H: There’s a real diversity to your production, does this reflect a wide range of influences?

T & M: We certainly have alot of influences.

T: House/techno certainly for me is a big part of that influence. Especially Chicago and Detroit are two of my main influences. The amount of soul put in those records is sometimes jaw-dropping.

M: But it’s not the only influence. Jazz, ambient, drum & bass and so much more also has a strong influence on us.

T: We listen to a lot of music and pick up anything that strikes our ear. If a day had 48 Hours we would probably spend 46 hours of that day just listening to beats. 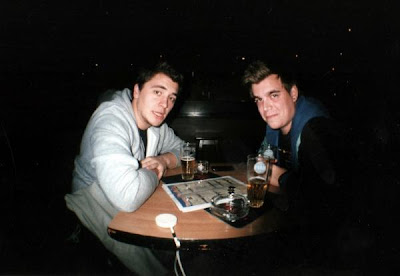 H: Given the range in your production what, do you think, is the defining characteristic of your tunes?

T: Atmosphere, we always work hard on creating an atmosphere.

M: Be it a dark or soulful one, that changes in every tune. But tunes that don’t do something to people (even if it annoys them) don’t serve a purpose. For us tunes need to create a certain feeling when you hear them.

H: Are there any tunes in your production repertoire that particularly stick out for you? Why is this?

M: We’re still learning every day so we can’t really agree on what is the best one is, up to date. Every tune we make is different and therefore it’s almost impossible to decide on which is the best one.

T: But Elysian Fields sticks out, not because we think it’s the best, just because it was the first drum & bass tune we did and it instantly got signed to Medschool.

M: The way we like our own tunes changes throughout time, for now I would say Foundation sticks out the most.

T: It portraits the soulful side of our productions really well, and the elements we used in that tune really stick out.

H: We’re aware of nights like Midnite Run, pushing the deeper side of things in Belgium; what’s your take on the Belgian bass scene – is it lively?

T: Belgian bass scene is OK, the past year a lot of young people came on the scene who like deep sounds and want to push it. Of course there’s always constants like Untitled! and Daily Dubstep who push things on a bigger scale, which is great because they helped to put Belgium on the map in bass country.

M: But it’s also nice to see some smaller promoters take the chance of pushing deep nights. The scene is pretty lively but also very tight, most producers/DJs/promoters know each other. We like it that way though.

T & M: We'd like to do a shout-out to not only Belgian producers and promoters but also some good friends out in the UK and US: Antics, One87, Gaz, Nasa, Kastor & Dice, Hookerz, Mzine, BunzerO, Cal & Sikey, TMSV, Jack Sparrow, Jazzy Jazzy, Heny G, Lurka, J:Kenzo, Syte, Killa & Instinct, Distal, Shortstack, Mr. Lager, Orphan 101 , Hospital Records crew, DFRNT and Joe Nice. And all the rest we forgot, you guys rock.

T: Improvising is key for when we do mixes, we don’t work by set tracklists and just do what feels good at the time

H: Any plans in the pipe-line or forthcomings you'd like to put the word out about?

T & M: We've got a 12 inch dropping somewhere around June, we can’t really tell you too much about it but we’re really happy with it! There’s also another 12 inch dropping sometime this year with two collabs by ourselves and Antics on Orientis Records. Furthermore we got our release on Medschool Newblood011 dropping next week and a release on Embassy records somewhere this year.