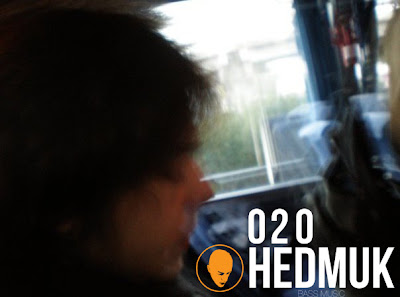 Our 20th feature comes from frontiers not normally associated with the deeper, darker bass sound - Turkey - and is an example of the ever-growing popularity, skill and variation within the dubstep scene. Gantz is one of a few Turkish producers pushing the darker bass sound: focusing on creating a strong beat he skillfully and originally builds forward moving tunes, heavy in percussive elements, which relay a real sense of energy to the listener. With a recent EP on Fent Plates Records we caught up with Gantz to get a sense of his influences and to hear his future plans. In addition Gantz has put together a deep mix showcasing his own sounds as well as similar producers. Enjoi:
Hedmuk: As an introduction, what’s your name, where are you from and how would you describe your sound?
Gantz: I'm Emir, from Istanbul, I like to explore bass and rhythm-oriented electronic music.

H: How did you get in to making beats? Are you from a musical background or is it something you picked up yourself?

G: It slowly started to take over as I got bored of my instruments. I'd been playing my instruments since I was about 13 or something...

H: How did you get in to the darker, deep bass sound?

G: I remember my ex-girlfriend playing me a Loefah tune, and a while later my mate (who produces as Unaware) introduced me to the sound properly.
Goon by Gantz

H: Where do you draw your influences from, and are they mainly musical or do you take ideas from other things as well?

G: Musically, I guess more of the half-steppers got me excited; but you don't even know where you get your influences from do you (laughs).

H: Your beats are full of atmosphere with subtle background sounds and layered textures: is the feeling and atmosphere behind a tune particularly important to you?
G: I can't say it is really, I pay more attention to the beat: I try to make it groove and try to create an overall expression. I've never thought that much about the atmosphere, maybe I do but I am unaware of that.
Praying Mantis (FENTPLATED011) by Gantz

H: What’s the bass music scene like in Turkey? How popular is the darker, sub-heavy sound?

G: We have the 'bass scene', but the darker sound is really not that popular.

H: Are there many producers making beats on a similar tip as yourself? And are there any nights pushing this kind of sound?

G: Yeah, Unaware is the guy to watch out for, Depthcharge is pushing his own thing we also have Flatliners. Those are just the guys I'm familiar with, but I'm sure there is a lot more. There are nights that are pushing dubstep, but you don't get much variety here. It's all happening in Pixie Underground: that's the place.

G: I suppose I just tried to express what I'm about recently...

G: Yeah, I have a forthcoming release on Sub Lab, nothing else for now. It's not that easy to get in touch with people when you live in Istanbul: you don't get the chance to actually meet people. Hopefully I will continue building tunes.