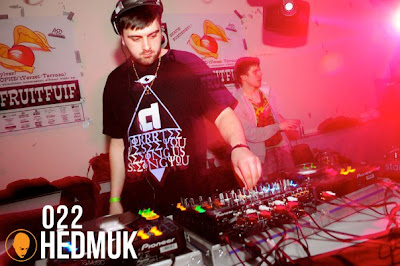 With a varying style of production ranging from a more aggressive, club orientated approach to a stripped back half-step sound Benton has slowly built an impressive repertoire of quality beats sure to please a wide spectrum of bass heads. Support for his deeper bits continues to come from no less than DJ Youngsta alongside N-Type, Hatcha and other big names whilst labels have been busy signing up a number of his tunes for future release. With a Debut LP in the works Benton has found the time to record a mix (3 deck business) for our feature series and answer a few of our questions.
Hedmuk: As an introduction, what's your name, where do you come from and how would you describe your sound?

Benton: I'm Benton, I live in South just out of London. I suppose I would describe it as a deep bass driven half-step electronic sound.

H: How long have you been making beats? How did you get into it?

B: I've been making beats since about 2007 but back then I was only fucking about. I think I've been making music seriously since I made the original have it your way and heard it played out by Unitz. I got into making music through my mate Sam (Arc-88). He had a mac so when I was about 16 I used to sit there when he'd go out and fuck around making some sounds but I had no idea what I was doing. Then he introduced me to unitz one day and he pretty much taught me about putting sounds together!

H: You first caught our, and others', attention with a more aggressive, dancefloor-projected style but have recently been coming with more deep, half-step vibes: do you usually have a few different projects on the go or do you move more transitionally through making different styles?

B: Yeah I mean I've always written different kind of styles it depends on what mood I'm in. I used to sit around and just make crazy bass sounds all day then realised that the drums where the harder thing to get right, when I'd sit down and write a drum pattern it would always end up being a deep rolling kinda vibe. I still make tear out stuff, I try not to stick to one style because I'll just end up boring myself!

H: Does this diversity with the tunes you make encompass a wide array of influences? Are your influences mainly musical, or do you take inspiration from other things aswell?

B: There is so much music being sent around and so many people producing these days it's hard to not be influenced by what you hear. Everyone's got something in their music thats inspirational. The tune doesn't even have to be good but I can guarantee that there is an element of the tune that's inspirational. Other than music i get inspired by general life-the further away from my computer I get the more I want to make a tune.

H: You've collaborated with Unitz and your refix of Goli & Ashburner's 'Field Of Vibrations' has gained a lot of attention: do you enjoy working alongside other artists in this way, and is it something you plan on continuing with?

B: Yeah I enjoy collaborations sometimes but I prefer doing remixes for people! I like working with vocals so if there's a sample like in the F.O.V remix I'll give it ago

Benton - Take me away by BENTONDREAD

H: With an album already in the making after relatively few, although well-received, releases, do you feel that there is a lot of pressure on you to deliver?

B: Hell yes! But you know I got thrown in at the deep end and there was a time a few months ago I was a bit like 'ahh' I gotta write this thing! but now I'm just chillin making some beats and gonna try piece them together soon and see what happens!

H: Take us through how you went about putting together your mix for us.

Well there's been so much good dark music out recently. I hear so much shit everyday like the scenes shit, it's dying, etc but if you dig a little deeper you'll find that it's still going strong and in my opinion as long as people keep doing what they are doing and ignore whatever hypes going on around them they will realise that it's all good. So this mix is pretty much deepness from start to finish which is rare for me to do but I enjoyed it.

H: Finally, are there any forthcomings or anything in the pipeline that you want to put the word out on?