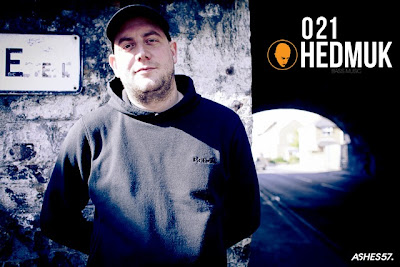 Tunnidge needs little introduction: one of the few producers to have two releases on the seminal Deep Medi imprint, the first to be signed to Chestplate Records following Distance's expansion of the label and co-owner of Origin Audio alongside Cyrus. With regular appearances on Get Darker as well a full and busy bookings schedule - which will take him to the states this Autumn - Tunnidge is somewhat of a looming figure on the Dubstep scene. Able to build both powerful, tear-out tunes popular in the club environment as well as darker, more contemplative production, his beats often tread the surprisingly fine line between Jump-up and deep relaying a real sense of momentum to any listener. Tunnidge has contributed the 21st mix in our ever-expanding feature series as well as finding the time to answer a few of our questions. Enjoi:

Hedmuk: To introduce yourself to those who may not yet be familiar, what's your name, where do you hail from and how would you describe your sound?


Tunnidge: I Produce and DJ under the name Tunnidge, I grew up on the outskirts of South East London I suppose you could describe my sound as dark and raw dubstep. I try and walk the line between depth and dance floor.


H: Are you from a musical background, or was it something that you picked up yourself? How did you get into making beats?

T: No I'm not form a musical background, music production is something that is very instinctive for me. I always listened to dance music so found the process of production and structuring very intuitive. I suppose years of listening and going to raves helped me gain a sense of what in my opinion works on a dance floor. I got in to making beats mainly from having friends that were making music. I was always awash with ideas and so it was just a process of learning what I could from tutorials and asking questions. People such as Rob Sparx, Slack, Cyrus and Distance have always been massively helpful, but I think as most producers will tell you, you end up developing processes that work for you. It’s always interesting finding out how other producers work and what their processes are, it’s good to be in a constant state of discovery.


H: Your tunes seem to hit the middle ground between the sort of deep rollers made by Cyrus and the tightly aggressive style of Distance; do you tend to make beats with a club/dance situation in mind?

T: Everything I build is built for a Sound System, so yes I suppose it is all pretty much aimed at a dance floor. However in a dance situation I am not always looking to just have that bass face moment, it’s good to make something deeper and perhaps take the music to another place this also helps heighten the intensity when it’s time to bang out. I seem to have subconsciously developed a production technique where I make one tune for the dance floor and one tune for me. This is something I try and reflect in my releases.

H: With producers like Pinch and Cyrus recently branching out and making beats nearer the 130BPM mark, have you been experimenting with other styles and speeds at all?

T: Yes I actually have a whole heap of stuff around the 130bpm mark. I think its great to try your hand at different genres, you learn so much and also in can revitalise your approach to your chosen field. Every time I go to Loefah’s he plays me loads of forthcoming Swamp81 bits, and his passion for it is quite infectious so I usually end up going back to the studio and knocking out some beats on this vibe. At the same time I think Dubstep as a genre has so much still to offer, the media attention and money have kind of stifled the creativity that was about a few years ago, but like all art forms the pendulum will swing back, and I’m excited to see where it takes us.


H: Despite the internet playing such a big part in the expansion of dubstep as a sound and genre, a lot is still made of its actual geographical origins in Croydon; as someone from the area in which Dubstep was 'born', how important a role do you think location played in the creation of the sound?

T: Where I am from is maybe 20 minutes from Croydon so im not sure how well I am equipped to answer this, also when the sound was really developing I was living in a totally different part of the country. So it’s not like I was about when Myztiks, Loefah, Hatcha, Cyrus, Artwork, Benny Ill, Benga and Skream were really starting to push things in Big Apple . My point of contact was Mala who would play me all the beats send me CD’s etc. So I heard it develop from a distance rather than in the physical environment of Croydon.
From a speculative point of view I can comment on how Croydon is viewed and what the people I knew in the scene were like in the early years? Croydon was always a bit of a cultural void, it was often viewed as a bit naff and you never had to look too far for a fight, same as it is now really! It always makes me laugh when I hear people making a “Dubstep pilgrimage” to Croydon! Bizarre. Then again maybe that’s it, perhaps that lack of anything of cultural substance combined with a few dynamic personalities was the catalyst of the musics development and ethos. I knew Mala, Coki, Loefah, and Poax and they always had a very interesting dynamic within their friendship. It’s weird when you know a group of people as mates that have been such huge factors in the development a whole new genre. So without going to deep I think we have to refer to the old adage “nature abhors a vacuum.”

H: Aside from your music, the artwork that you do for the Deep Medi releases has become iconic within the dubstep scene: where did the idea for these designs come from?

T: The idea for portraits of the producers was Mala’s, the style of the Medi heads is just my drawing style, that it really. It’s great that people mention them as “iconic” I feel very honoured to have been part of the deep Medi history and identity.

H: The label you run with Cyrus, Origin Audio, went quiet after the announcement of a forthcoming Commodo 12": does the upcoming charity release of your remix of Truth's 'Puppets' mean you intend to keep the label going?

T: Yes Origin Audio will be continuing to release, but we are in no rush to churn out release after release. We are happy to wait and release music that we believe in, the market is so saturated at the moment we think it’s important to put out the best music we can rather than a vast schedule of forgettable music. Origin Audio 003 will be getting mastered very soon, so hold tight for that.

H: Finally, are there any forthcomings or projects in the pipeline that you want to put the word out about?

T: Yes I have a forthcoming release on the Getdarker label , two tunes “Decay” and “Control” will make up GetDarker002. Also you can hear some of my tunes on the forthcoming “Dubstep Allstars 8” mixed by Distance. More releases on Chestplate and Deep Medi as well as some releases on less expected but equally big labels, so I’m very happy. There is also one very big project in the pipeworks which I am very excited about, can’t say anything at the moment, but I feel like it will change a lot of things in the dubstep world. Stand by. Also I will be hitting the states for the first time in September so im really looking forward to playing out there!